Now I Organize With POWER

It isn’t accurate to call this news any more, I guess.  It has been almost 2 months since I stepped down from ROC.

If you didn’t know, you may be confused by my recent quote in the Spring Edition of Edible Philly that just hit newsstands last week, in which I talk about the state of the restaurant industry-

“Everybody likes to brand themselves as being sustainable,” says Rodriguez. He thinks restaurant buzzwords like “sustainable” don’t mean much when the values implied don’t extend to the people who work there. “It doesn’t make any sense to have locally grown lettuce if the person putting the salad together has to go to work when they’re sick.”

Pick one up.  The extensive expose was courageously written by Emily Teel, herself a local restaurant server and journalist.

Don’t let the article fool you though, I began talking with Ms. Teel late last year.  I stepped down as the Lead Organizer at Philly ROC in February.

My new job, as an organizer with Philadelphian’s Organized to Witness Empower and Rebuild (POWER, a PICO affiliate) is a return to my old roots.

During my days as the Executive Director of Jobs with Justice (from 2003- 2008ish) I was also the coordinator of Interfaith Worker Justice (IWJ).  I have always been a rampant “networker.”  In fact, in that capacity, I attended the first national meeting of the Restaurant Opportunities Center in the national offices in Chicago (around 2006?).

Anyway, in my time at Jobs with Justice, which I loved, I also noticed that faith communities organized in a entirely different way than my friends in the labor movement.

Maybe it is simply a difference of style that works for me , but I have always found that “relational” style refreshing and extremely powerful.

This came to bare in a major way during the Philadelphia Officers and Workers Rising (POWR!) campaign to organize security officers campaign.

The POWR campaign was hosted and sustained by the faith community.  In the darkest moments, JWJ had to lay off all of the staff.

Eduardo and I had to survive on contributions from our family and friends (and my girlfriend at the time, and now wife, Emily Randle) and unemployment checks.

It was the hopes, love, support and prayers of security officers and our friends in the faith community like Rev. Dwayne Royster, Rev. Jay Broadnax, Rev. Schaunel Steinnagel, Rev. Andrew Plotcher, Rev. Beverely Dale and many more that got us through.

The POWR campaign got its only financial resource (post-JWJ) from the Presbyterian Hunger Program and Bread and Roses Community Fund.

I learned a lot from these leaders and we accomplished amazing things together.  The effort to win paid sick days evolved into wage theft campaigns and eventually into the independent Philadelphia Security Officers Union (PSOU).

Since that time, the PSOU has won more than $2 million in wage (extremely conservative estimate), benefit and working condition improvements in the city and is still representing security officers well at the Museum, UPenn and the Riverfront.

Most of all, though, I will never forget that moment when I witnessed the power of faith.

After months of trying to vault our message of “the workers need paid sick days” over the official wall that guarded the Temple University Board of Trustees, Rev. Dwayne Royster caused what I will always remember as the “Holy Disruption.”

At this rally on December 10, 2008, the Reverend stood in front of the police that were blocking the door to the Board of Trustees meeting, preventing us from communicating like they had so many times before.

Dwayne spoke about how God had called on so many before to disrupt their lives for the greater good, how Mary had to disrupt her life to give birth to Jesus.

At that, he called on us hundred or so protesters, and even the police, to disrupt the meeting for justice.

At that, Reverend (now a Bishop) turned around, faced the police and began marching toward the door.

I was dumbfounded when the police moved away from the doors. 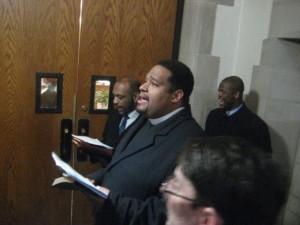 We lined the stairwell and the doors.  We sang and we prayed, and when the police warned us to leave, we locked arms and sang louder.

Only when the paddy wagons pulled up and zip ties were laid at our feet did we exit.

I knew at that time that I wanted to be a part of this world.

I am proud to now organize for an organization lead by Bishop Dwayne Royster and am looking forward to organizing for POWER,