After five years with Jobs with Justice, I am moving on.  I will be working with the Philadelphia Security Officers Union and various projects over the next few months.  This blog will be my home on the web for this next phase in my organizing life.  Please check back periodically to keep up with my work and to see various commentary on issues of the day.

I woke up in the middle of the night a couple nights ago.  There was a warm rain coming down and the air was moist.  I felt comfortable, wrapped in familiar setting that appeared below my half opened eyes.

But, as I laid there, in the dark, a strange feeling suddenly washed over me.  I realized that the perception that I had a second before was not reality.  I realized that a moment after I had woken up I had imagined myself where I was a decade before, not in my bed in Philadelphia, PA, but in a mine camp outside of Juneau, AK.

My mind had wandered through a dusty and shuttered part of my mind and when I awoke, my senses had mistaken this oddly warm, winter rain for the spring rains of South East Alaska.  When I realized my mistake, déjà vu washed over me.  My bed tilted backward through the floor in tight, dizzying arches.

I am no longer a miner.  I flipped through the scrap book in my head.  I pictured all of those miners that I grew up around, and worked beside.  For twenty five years, I knew guys like that; guys with wide, beaten hands; grey, greasy, rings of ore dust staining the skin around their eyes and enormous laughter.  Guys like my father, my brother, like me.

There was not a day in my first 19 years that I ever thought that I would ever be anything besides a miner.  When I started mining, I went underground with people that I went to high school with.  The old timers were men that came over and drank beers with my dad.  It felt like moving to a different room in your own house rather than a new period of your life.

When I think about what I have been doing as the Executive Director of Jobs with Justice, I feel like I have somebody else’s life.

I look back at my five years at Jobs with Justice with a lot of pride.  I think that I was able to make my contribution or as we used to say under ground, “done my share of damage.”

I am not going to even attempt to list everything, but here are a couple things that I will never forget: 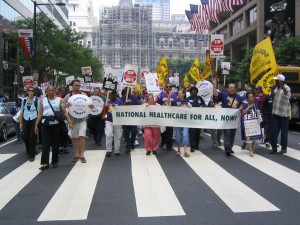 They will be building the movement for years to come.

After all of that, I have learned a lot.  Now is a good time to step aside.  Luckily, we have Gwen Snyder to take over where I left off.

Gwen comes to us with a background in community organizing and fundraising.  I first met Gwen when we were on the campaign charge at the Philadelphia Museum of Art.

Gwen lead volunteers in a community canvas to find museum members that would be sympathetic to the PSOU effort.  Gwen successfully organized volunteers to contribute more than 100 hours and to gather thousands of petition signatures.

Gwen was a part of our small group celebrating the election victory in the rain.

I know that Gwen has big plans for JwJ and will take on the tough task of chapter development.  JwJ will be much stronger for her.

I have future plans too.  The Philadelphia Security Officers Union is the most important thing that I have ever worked on.  This is trade unionism done right!  The model that we developed, which puts the decision making in the hands of the workers from day one, that builds leadership through worker center activity to direct-action to union, is a valuable one.   In this day when labor victories are few and far between, this alternative model needs to be developed.  I am committed to helping the PSOU get all the way to their first contract.   I also want to continue using this method to build worker power.

Over the next months, I will help the guards coordinate the various parts of our campaign including our direct-action campaign, negation team, fundraising, grant-writing, political action and faith outreach.  I look forward to working on a team with Eduardo Soriano – Castillo and Daniel Duffy as volunteer staff and with the many PSOU leaders such as Donald Lindsay, Bernardo Dickerson, Dynnita Bryant, Cecelia Lynch, Walter Lunsford, Sulaiman Kumara, Nate Alston, William Hollis, Lashan Stewart, Nate Crawley and our volunteer leaders like Lance Geren, Thomas Paine Cronin, Gwen Snyder, Paul Gottlieb and Warren Davis.  As you can see, we are building a union with almost entirely volunteers.  We continue to innovate and do “deep” organizing.

This year I will also spend time focusing on my professional development.  I have been selected as a Fellow in the Center for Progressive Leadership Program.  This nine month program will link me with other leaders in Philadelphia.  These connections will open more opportunities for me.

As for the next “job,” I have to admit that I don’t have anything lined up.  I haven’t begun looking.  I plan to trim sails so that I can devote all my attention to helping the PSOU win that historic, first contract and raising money to cover the unions expenses.

I can tell you that what ever the next job is, I hope that it will give me a chance to further develop this model that we pioneered and will have the critical elements of; organize the unorganized, using creative and ground breaking strategies that build grassroots power, training rank-and-file workers and outside supporters on the value of collectivity and executing fun campaigns that empower normal people.

How can I go wrong?