7,000 march to Reclaim MLK in Philadelphia

I was helping to stage manage the #ReclaimMLK Day rally today in Philadelphia. It was an amazing event. Media estimates are between 7,000 and 10,000 participants. Honestly, I don’t know that it matter. What is clear is that it was the largest protest in Philadelphia in probably a decade.

The energy was great for the march and held up for most of the event. People started to drain away in the last hour when it started to get really cold.

The MLK DARE Coalition announced our demands which are to end Stop and Frisk policing in Philadelphia, a full, fair funding formula for schools and some local democratic control of our school district and a city-wide $15 minimum wage.

The coalition has called on all who want to build the movement for racial and economic justice to convene at Mother Bethel AME at 6th and Lombard ST, on Saturday, January 24 at 1:30 pm. 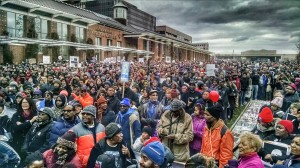