The Rich Are Coming For Our Benefits, And They Run Our Government 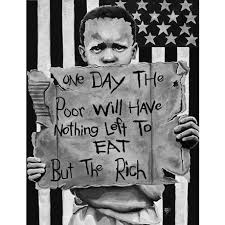 A new article in Science Magazine reports that a recent sociological experiment shows that wealth Democrats and wealth Republicans care less about economic equality than most Americans.

Simply put, the rich place a much lower value on equality than the rest. What’s more, this lack of concern about inequality among the elite is not a partisan matter. Even when they self-identify as progressive Democrats, elite Americans value equality less highly than their middle-class compatriots.This finding has profound implications for public policy…Regardless of party, the elite donors whose money dominates politics, and the elite officeholders whose decisions set policy, don’t value economic equality. When the American government abjures egalitarian policies, it is implementing the bipartisan preferences of the American elite.

The power of the rich in our democracy is profound, in fact, even in matters of life and death, the wealthy have an upper hand.

A recent study by the National Academies of Sciences, Engineering and Medicine that the rich live on average 10 years longer than the poor and also end up using a much higher level of government benefits.

The proposal to raise the retirement age would most hurt the poor, who would end up working even longer and closer to their last days, many dieing before ever accessing their Social Security Benefits.