The water is perfect, can Big Labor ride the wave?

Our economy is growing and new jobs are being created. However, black and Latina women are falling further behind while wages for even those working are stubbornly stuck in place.

These trends are creating the perfect environment for workers to organize. A recent ruling by the National Labor Relations Board strengthens those trends even more. The question is: can Big Labor, a movement, which has been unable to effectively organize in decades, take advantage of what may be a once in decades opportunity?

The US unemployment rate, which peaked at more than 10% in 2009, has been slowly but steadily falling for 5 years and is currently at around 5%. Though unemployment has dropped below that rate in our nation’s history, for the past two decades 5% unemployment has been considered “normal.”

Read more on the Optimal Unemployment Rate in this NPR post.

Between the 1950s and the 1970s the unemployment rate dipped below 5%, and at points as low as 2.5%. This was about as close to theoretic “full employment” as possible. It was also during this period of economic growth where we saw wages rise and unions explode into prominence. 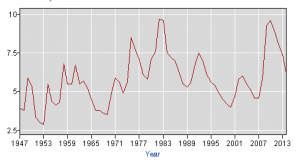 An economy near full employment gives workers some breathing room. When unemployment is low, workers are emboldened to organize because they are less afraid of losing their jobs. If their boss fires them for exercising their rights, they can probably land another job quickly.

On the other side of the coin, employers have to compete for workers. Since everyone is working, it is harder to fill positions unless you outbid your competitor for talent by offering better wages and benefits.

Today, we are at 5% unemployment, yet we see no signs that employers are bidding up wages to compete for workers (wages rose by approximately 2.5% for American workers last year vs 8% per year during the 1970s, when unemployment was below 5%).

To make things worse, wages were lagging behind historic levels for 30 years before the Great Recession. The American worker has fallen so far behind, that it is difficult to imagine the alternative reality in which wages have reached what activists call a “Living Wage.”

Luckily, we don’t have to imagine it. MIT Professor, Amy Glasmeier, published an interactive, living-wage calculator.

The website shows us how much wages should be in cities, counties, and states across the country if the goal were to allow workers to support themselves and escape from poverty.

Single-parents in Philadelphia would need to earn $23.60/hour in order to keep their head above water and prosper. This sharply contrasts with our current minimum wage of $7.25/hour. The 4th largest sector (Actually, I think that this sector has since overtaken teaching in the 3rd spot after several rounds of lay-offs over the last 5 years) of the Philadelphia economy is food service workers, with a median wage of about $9.50 per hour.

For women of color, the trends are even worse. According to US Department of Labor, unemployment rates for black women have stalled at 10.6% and Latinas have seen rates rise slightly to 9.3%.

Meanwhile, sharing economy jobs are encroaching on industries with high concentrations of black and brown workers. 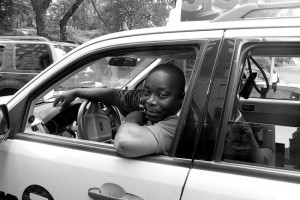 I admit that when Uber emerged I was skeptical that it would actually be a disruptive technology (it is more a regulatory disruption of the medallion monopoly system than a technological disruption). I figured that cab companies would soon close the technology gap and all would basically go back to how it was before with perhaps a new company in the mix. However, years later, the shock waves are now starting to be felt throughout the cab industry.

An article in Crane’s Business describes the contrast between now and just a couple years ago. Back then, prospective cab drivers were reportedly bribing cab companies for jobs, “…now so many taxis are idle that some garages don’t have room for them all, prompting complaints from nearby residents about cabs hogging street parking.”

Likewise, auctions for cab medallions in New York City and Chicago are getting few bids and prices have cratered. Medallion owners are reportedly starting to default on loans and banks and credit unions are jumping out of the medallion, loan-making business.

On the bright side, it seems that, on average, you can make a little more as an Uber driver than as a cab driver, but now the capital cost of owning and maintaining the car falls on the driver. For poor minorities and recent immigrants this capital investment will likely be more than they could possibly bear.

Allow me to point to one more set of dark clouds on the horizon before introducing some possible heroes.

Teaching is another profession with a high concentration of women-of-color. This trade has also been under attack for years. I believe that it will start turning around soon thanks to the work of POWER Interfaith and dozens of other education advocacy groups like PCCY, Action United, and PFT Local 3. But, before things could get even a little bit better, the School Reform Commission has made them just a little bit worse by creating chronic understaffing in our schools.

In January 2015, the School Reform Commission sub-contracted the for-profit, Source4Teachers for its substitute teacher services. The company promised to fulfill 75% of the request for substitute teachers between the beginning of the contract and now. Source4Teachers has yet to fill more than 12% of the district’s requests, leaving an astounding 88% of need unfulfilled. Surprising to no one but the SRC, slashing the daily rate of teacher presence to fluff up profits and breaking the “career advancement ladder” into full-time, teaching positions had an incredibly negative impact on our students’ education.

Given these examples, it is clear that for working people, the 5% unemployment rate is no cause for celebration.

There are a couple of tools that we can use to try to increase the wages, hiring, and power of workers.

For the last several decades, The Fed has been run by “inflation hawks.” Inflation hawks are people that worry about prices increasing in our economy more than they worry about unemployment rates. Their obsession with inflation has helped business owners at the cost of workers.

For the last year, the Center for Popular Democracy and partners (such as Action United) have been fighting to influence the Fed on a regional and national level. They want to keep the Fed Rate at 0% (where it has been for the last 7 years) until unemployment drops further, wages rise, and we see real signs of inflation (also historically low).

They have done a good job of supporting Fed Chairman, Madame Janet Yellin, who is inclined to keep the rate at 0% despite the opposition of the historically inflation-paranoid regional chairmen.

The open secret about the Fed, though, is that many economists, some who previously worked for the Fed, have doubted the Fed’s ability to control interest rates. In the last 7 years, as rates have sat at 0%, financial markets have gotten even more complex and multi-national. Furthermore, the Fed has created money at a rate never before seen. Money has been so cheap for so long, the Fed has had to invent new mechanisms to raise the price of money.

It is hard to say if the Fed can raise interest rates at all. I bet you are wondering: “Wait a minute, isn’t that good thing? Don’t we want them to stay low for longer so that more people go to work and wages will begin to increase?”

Yes, we do. But, if the Fed no longer has as much influence over this part of our economy it might cause other problems that we can’t anticipate. (Think: Someone cut the brakes lines on the Fed’s Sedan.) 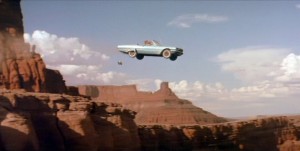 That is another topic entirely.

We were talking about driving the employment rate lower and wages up. Let’s not forget the other mechanism for increasing wages: workers organizing.

We are near full-employment. Wages are stuck in low gear. Many people-of-color and women are suffering even during the economic expansion. Even educated, white workers find themselves not doing the work that they spent a lot of tuition money getting ready for.

Unions represent only about 7% of workers in the private sector. It would seem that the only difficulty that the unions would have would be trying to pick the best place to start organizing.

Even the legal landscape, long a complaint/excuse of the unions, has begun to shift in favor of organized labor.

One of the more challenging macroeconomic realities that labor unions have faced has been the expanding workforce of sub-contracted, franchised, and temp workers. In August, the National Labor Relations Board cleared the way for unions to organize these workers.

Some unions and worker centers have proven that they can be as innovative as any internet startup.

For example, SEIU has won major victories by innovating outside the traditional federal oversite regime, establishing unions without having to conduct Labor Board elections through card-check agreements.

SEIU is also the driving force behind the Fast Food Forward movement that has had McDonald’s workers walking off the job in cities across the nation, which has already resulted in $1/hour raise for thousands of workers.

The National Guest Worker Alliance worker center has been able to establish power with workers through non-union organizations and direct-action campaigns.

With few exceptions, the rest of the labor movement, unfortunately, seems as lifeless as it has for decades, even abandoning powerful efforts that have made some progress.

UFCW recently announced that it is scaling back one of the most exciting organizing experiments we have witnessed in years, OUR WALMART, the effort to form non-union, worker committees in stores. Dozens of workers have walked out for short-term strikes and these protests have resulted in $1/hour wage increase, which soon manifested at other retailers in the market such as Target.

Can Big Labor ride the wave to the next era in which our nation has a powerful worker movement or will it wipe out?

Sadly, the signs don’t look too promising. The good news is that they can gear up and get in the swim easy enough.

I don’t think that this is a question of whether you can teach an old dog new tricks (I don’t think most of the current dogs at the top of the unions were around back when the majority of labor was aggressively organizing). In fact, if my organizing successes are any indication, it is precisely the lack of expertise that can be your greatest strength when organizing.

Not being an expert can force you to be creative and to rely on the people around you.
If the organizer/worker/organizer worker is guided by the right set of principles – building democratic, grassroots power – he or she can figure out how to overcome just about any obstacle.

The economy has rebounded and is on the edge of historically low unemployment rates. Yet, this has not resulted in the expected wage growth. Activist organization and a sympathetic Fed Chairman have been able to hold the “inflation hawks” at bay in hope of reaching full-employment and wage growth, however, they probably can’t keep it going for much longer (experts expect the Fed to begin gradually raising interest rates before the end of the year). Worker organizing looks like the only promising opportunity to regain some power and wages for workers.

SEIU and worker centers are putting forward some exciting experiments however, these effort are not enough in themselves to turn things around and the rest of organized labor seems stuck in the past or putting the lever in reverse.

The sad truth is, there is not enough energy or ability left in the labor movement to expect them to come back and save most of our nation’s workers. The good news is, the conditions are perfect for anyone who is willing to make trouble.

You can improve your work life. Just start organizing.