Direct Action: Protest is the only hope we have.

Tweet
TED X was a fantastic challenge. I had a great time and met some amazing people. The other TED X speakers rallied around each other and we spent dozens of hours coaching and helping each other. Family, friends and allies all pitched in to help me prepare. I will never forget this wonderful experience.

Since that time, I have been very busy. In fact, after giving the final speech of the night at TED X, Emily and I hustled over to the after party. We had a few drinks and went home where I packed some clothes and got 4 hours of sleep before going to the Windcall Institute board meeting at Rancho Gallina outside of Sante Fe, NM.

The Windcall Institute is an amazing organization that is dedicated to preserving and sustaining our most valuable resource in social change work…the organizer. We do this by granting some residencies and by promoting “Staying Power” practices which keep trouble-makers tuned into their values, creative, courageous and strong.

Since I left town, some amazing things have happened. POWER and SEIU were able to prevent American/US Airlines (AMUS? USMerican?)from carving themselves out a huge loophole in the recently won Living Wage Ordinance victory.

This was big enough of an victory on its own, however, when taken in its full context, it could signify a massive shift in the center of grassroots power in our city.

This law has already improved the lives of thousands of people at the airport. American/US Airlines were the lone (and most significant) holdout.

American/US Airlines were able to hold out because of the pre-existing lease agreement that allowed business as usual. In the past 6 months we have heard rumors that the airlines were trying to find a work around including creating a special lease agreement that went on under the old terms until infinity, some how magically avoiding renegotiating it while still changing it.

They also really wanted to eliminate a “Labor Peace” clause that guarantees workers the right to join and form unions without being fired. Sarina Santos can tell you why this is so important.

During the last few months, many brave workers have joined the movement to have to force American/US Airlines follow the law. One of the bravest was Sarina Santos.

Sarina is a mother of 4 and a baggage handler earning minimum wage at the airport. She spoke up at many events but apparently, she went too far when she spoke at an event welcoming Cardinal Oscar Rodriguez (an aide to Pope Francis). She was terminated days later.

Despite her termination, she has not stopped fighting, in fact, she has only gotten stronger.

On Monday, June 8, I was happy to have a sit down with Daily News Inquirer reporter, Will Bunch. I asked him to hear my “Idea Worth Spreading” as I prepared for my TED X performance. I did tell him what a big role “public courage” has played in my life and my practice. He was a huge help and a fascinating person to meet (one of the best “tricks” I have is to ask people that I don’t know, but admire, for help as a way to meet with them. Almost everyone wants to be helpful and share their expertise).

I also got to tell Mr. Bunch about Sarina and her termination.

He weighed in on her fight and her courage. He contrasted it with the shallow, boring, business as usual top Presidential candidates yesterday in his Attytood column.

“…Sarina Santos did not do the easy thing. She spoke up to anyone who would listen…

If you are not a protester, you might view her termination as just a thing that happened. However, from an organizers point of view, this is classic “escalation” from American/US Airlines. They are using Sarina’s firing as a warning to all other workers. “See what will happen if you continue to agitate?”

Damping down the dissent was key for their next move, behind-closed-doors-deal-cutting. A task that seems a lot less slimy if there are no workers interfering.

Last Tuesday, June 9, we held a rally and prayer vigil for Sarina at City Hall.

Councilwoman Maria Quinones-Sanchez (and other elected officials) attended the rally. She told us that she thought that American/US Airlines was going to refuse to comply with the law and that they were lobbying heavily to get an exemption.

On Wednesday, POWER Interfaith organizers and SEIU kicked up the organizing into high gear.

At one point, Rev. Gregory Holston and Rev. Robin Hynicka surrounded Councilman Robert Henon in his office and asked him to stand strong. In the beginning of the meeting, Mr. Henon was cautious. After the ministers offered a prayer for Mr. Henon and even laid hands on the Councilman in prayer, the Councilman’s stance noticeably changed. He pledged to make sure that “the law is followed.” 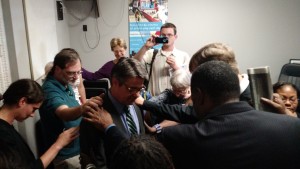 The POWER crew continued through city hall and prayed with Councilwoman Quinones-Sanchez (she asked for support and the flock obliged) and continued to talk to and pray in City Hall through out the afternoon.

One of the points that I made during my TED X talk is that protest can include many different elements besides chanting and marching. It should include all parts of our creative and spiritual expression.

Guess what, it doesn’t even matter if you are religious! You don’t have to believe that the prayers offered are going into gods answering machine to see how sincere the pleas for justice are.

You can be sure that Councilman Henon knew in all certitude that these activists were 100% dead serious about their demands.

So, they prayed. They won.

Perhaps more important, though, is a noticeable shift in power in our city.

I have no doubt that this loophole would have gone through had it been proposed just a year or two ago.

Our city has been dominated by an alliance of big business, the building trades and pro-business Democratic officials.

In the past, no development deal, from the Convention Center expansion to the Comcast Center to even the rehabbing of the Gallery Mall would go unsweetened by Philadelphia Democrats. The powerful building trades have almost always staked out a pro-business position to the point of even opposing outside unions using their leverage to get some ability to represent the workers in the facility after the builders cleared out.

Just look at the almost 100% union free casino as an example (what Lynn Fox, Pres. of Workers United union, did on the Gaming Commission to leave empty handed could really use some explaining).

I don’t know if the Building Trades were lobbying along side American/US Airlines. But, since the airlines threatened to not build one of the new runways without the loophole, I would be surprised to find out that they weren’t.

If they were fighting against us, they must have been very surprised (and happy with) the result of our organizing. This was the first time in my recollection that the progressives were able to walk away with a major win against their wishes.

I hope that they can see this as an opportunity and not as a threat because we are just getting started.

We can transform our city, our nation even, if we act now. That is what I said in my TED X talk. Will Bunch puts it even more elegantly-

“…But the biggest thing we need to realize is that we need not so much to listen, but to act. To become not just voters every four years, but activists every day.”